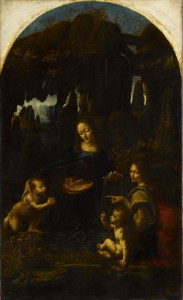 There is a big brouhaha among two of the greatest museums in the world over what Leonardo da Vinci (painter of the “Mona Lisa” and “The Last Supper”) might or might not have painted five hundred years ago.

Decide for yourself which is the “real” painting.
Hint:
1. Leonardo’s genius was portraying real human emotions on his subjects faces.
2. Leonardo believed painting was a form of science and he invented a technique of blurring edges (sfumato) to produce mellowed colors and leave something to the imagination.  No sharp edges.

Take a look at the two paintings above. Which do you think is the “real” Leonardo?