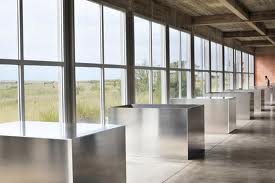 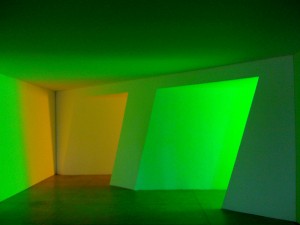 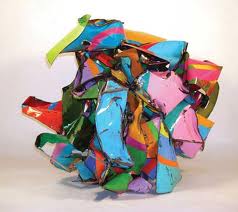 In 1979, the phenomenally successful sculptor Donald Judd desperately wanted to escape glitzy and gallery-obsessed New York City, and go where “nobody knows you and nobody gives a damn.”

He found a place where nobody gave a damn…Marfa, Texas.

The tiny (pop. 2,000 souls) West Texas/Mexico border town is 200 miles from nowhere!  Fly to El Paso and drive three hours and you’re there.

Judd bought dozens of abandoned buildings…among them an old US Cavalry base (later used by the U.S. Government as a camp, housing German POW of WWII), a defunct bank, an empty Safeway, 6 homes and the local hot springs.  Judd wanted to use the spaces as they were…the good, the bad, and the ugly, to install his and other works of artists he admired.

Today, Judd’s sculptures and other artists’ world-class art pieces breathe life into the desert.  Judd’s most famous installation is a series of 100 aluminum cubes, each one different from the other.  Although they are housed in two of the abandoned POW barracks, they reflect the light of the desert streaming in through huge windows.  After awhile one can’t tell which is the industrial material and which is nature.  It is stunning.

John Chamberlian, who wrested rough magic from scrap metal of wrecked automobile parts, smashing and twisting together fenders, fins, bumpers and hoods, made history in sculpture. Ironically, what we might consider sculpture, glorious in color and form, was mistaken by garbage collectors for scrap metal and two pieces were towed away from outside a Chicago gallery warehouse in 1973.

But Marfa isn’t just a sleepy little art town.  Marfa is a state of mind.

Art students, emerging artists, famous artists, movie stars, poets, filmmakers, and renowned architects, can all be seen either giving formal lectures or hanging out at Brooklyn abstract painter Jeff Elrod’s studio. Elrod’s funky studio serves as a clubhouse/crash pad for the artists and is the scene of outlandish plays, alternative rock band music and just plain acting out!

Just a few hotels…historic El Paisano (the movie Giant was filmed there) and El Cosmico (rent nightly your very own Airstream trailer!)

Food…this is a different country, where you can do doughnuts in the middle of town in your jeep, and then go and eat escargots with parsley and garlic butter, drink a $200 bottle of wine and watch an experimental play.

Art in the Desert! Watch this remarkable video of Marfa, Texas.
Click here if unable to view the video.