If you happen to be in Venice, Italy between June and November, you will see art everywhere…strange art, really ugly art, and beautiful, take-your-breath-away art!   Art is in the museums, the palazzos, the canal-fronted warehouses, small intimate gardens!   It’s everywhere!

The Venice Biennale, one of the most prestigious contemporary art shows in the world is happening!   Artists from 88 countries are presenting sculpture, painting, video, installation, performance…all the art you can imagine.

But, alas, some of us can’t make it to Venice. 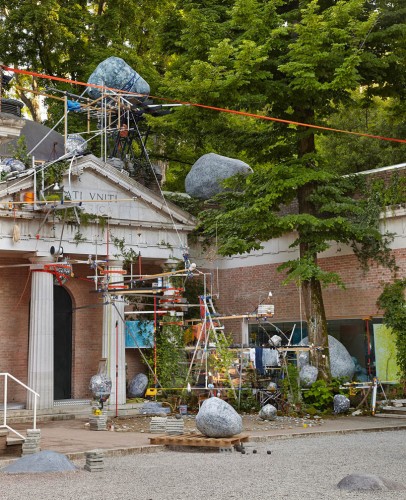 American artist, Sarah Sze, shows “Triple Point”, a huge and wild collection of found objects from ladders and paint cans to scraps of paper.  Sze has wrapped Venice’s ancient buildings with these objects. 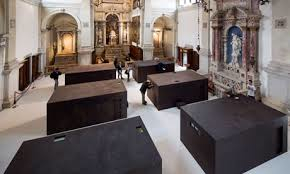 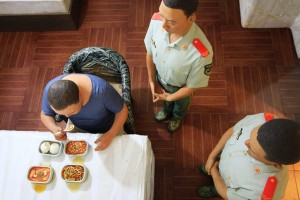 Political art is alive and kicking at the Biennale!

Ai Weiwei is China’s best known artist.   Only he protests the abuses of the Chinese government and Beijing officials don’t like him a bit.
In 2011, the Chinese condemned Ai’s art, burned his studio and held him in a secret prison for 81 days.
Ai wasn’t allowed to travel to Venice after his release from prison, so he clandestinely made his art pieces, then quietly transported them out of China to Venice.

The art work features six imposing steel boxes.   The boxes have narrow slits in the windows, through which visitors peek privately onto eerily life-like scenes of robotic officers, dirty bathrooms and bleak food.    A re-enactment of Ai’s 81 day detention.
__________________ 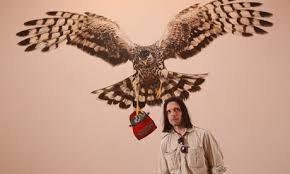 British artist, Jeremy Deller, takes aim at the royals and the wealthy.

This audacious artist zeroes in on a scandal in Britain in 2007.    Prince Harry and a mate were out a-hunting on one of the royal estates and “maybe accidentally” shot two endangered birds…hen harriers.    Although the caper couldn’t be proven, the British press had a merry old time with the story.

The cheeky Deller fills one wall at the Biennale with a huge mural of one of the owl-like birds clutching a miniature Land Rover in its talons.

As for the Land Rover, it is the object of the bird’s revenge, and Deller’s swipe at the haughty who ride them, particularly on London roads where he cycles.

Watch this video to see more art in Venice!   Click here if unable to view the video.