Many a fine artist today owes their extraordinary use of color and dynamic composition to the influence of comic book artists. Check out Jeff Koons, Andy Warhol and Roy Lichtenstein. 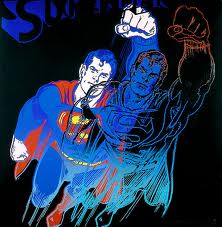 Superman! From the planet Krypton? Or from the imaginations of two Jewish teenage boys in Cleveland, Ohio in 1936. World War II was on the horizon and the boys were horrified by reports of the evils of Hitler.

Superman was born! The mild mannered Clark Kent transformed into a captain of truth who defended the weak and battled to save the world from destruction. Superman’s young creators, Jerry Siegel and Joe Shuster designed his costume bright blue with a red cape to show the illusion of flying. (Artists, take note!)

After years of rejections by comic book publishers, DC Comics bought the rights to Superman for a modest $130.

America entered World War II.  Jerry Siegel was drafted and served in the US Army, came home and found that Superman was the comic hero of America!

In 1970, after years of litigation, Siegel and Shuster were acknowledged by DC Comics as Superman’s creators and were each awarded $20,000 a year in royalties for the rest of their lives as compensation. 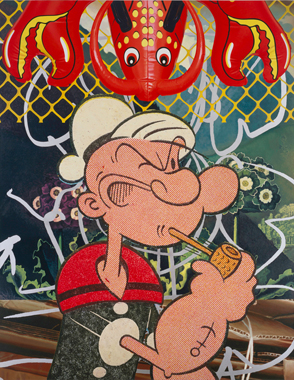 It’s 1938.  The Great Depression is raging.  Americans are desperate.

E.C. Segar, Illinois cartoonist, creates Popeye!  Popeye flexes his muscles and eats spinach.  There are no obstacles that can not be overcome.  He is strong and sympathetic.  He is funny. 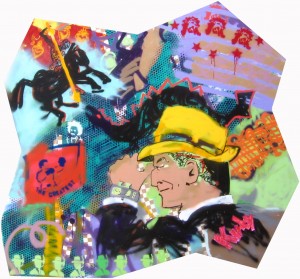 Chicago, 1930.  Violence ran amuck.  Al Capone, arch gangster was terrorizing Chicago.  Something had to be done.

Dick Tracy was created by cartoonist Chester Gould.  Dick Tracy fought crime with his wits and advanced gadgetry.  Right was right and wrong was wrong.

And America loved the colors of his costume…yellow hat, red and white striped tie, and jet black suit.

Art could be colorful again.