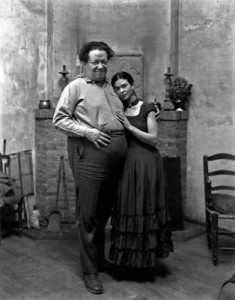 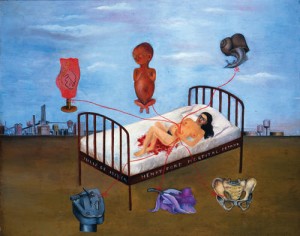 Frida Kahlo, born in Mexico in 1907, is Mexico’s most exalted woman artist. As a teenager, she suffered a severe injury in a streetcar accident nearly severing her spine. Confined to her bed for many months, Frida began painting while lying on her back. Chronic pain stayed with her throughout her life.

Shortly after the marriage, Diego, chronically unfaithful, began affairs with other women. Frida suffered two miscarriages which inspired her heartbreaking masterpieces, graphic/symbolic paintings of emotional and physical pain…paintings that exalt the ability of women to endure truth, reality, cruelty and suffering.

Frida’s fame grew. She is considered to be the first surrealist painter and was the first Mexican woman artist to be represented in a major European institution, The Louvre, Paris.

“July 13, 1954 was the most tragic day of my life. I had lost my beloved Frida forever. Too late now, I realized that the most wonderful part of my life had been my love for Frida.” – Diego Rivera

“There have been two grave accidents in my life…One in which a streetcar knocked me down and the other was Diego.” – Frida Kahlo

Watch this video of Frida Kahlo’s art. “I paint my own reality.” – Frida Kahlo
Click here if you are unable to view the video.