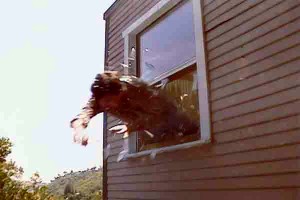 Artist Joe Sola was in his second story studio being interviewed by a couple of haughty and condescending art critics.

Midway through the humdrum interview Sola got up and took a flying leap out of his closed second story studio window in an explosion of glass.

The stunned art critics dashed to the window, only to find Sola chortling on top of a pile of strategically arranged cardboard boxes eight feet below. Surrounding him were harmless shards of fake Hollywood style shattered glass. Needless to say, the studio visit was no longer humdrum!

“People would scream with fear and pleasure at the same time,” Sola recalls.

He repeated this act 22 times over several years.

Artist’s message: Shattering the arrogance of the art world.

Performance art, unlike performing arts, is not a play, symphony, or dance. It involves a group or individual artist becoming part of the art.
__________________ 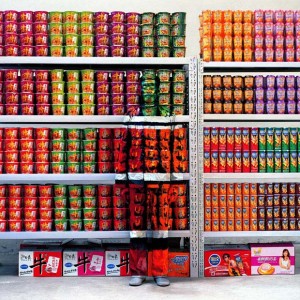 Can you see the figure in this image?

Liu Bolin creates camouflage art work. He literally paints himself to disappear into signs, blend into sculptures and become an invisible part of his environment.

Artist’s message: a political statement protesting the disappearance of poor Chinese from their homes and villages caused by China’s insatiable development.

Watch this video on Liu Bolin…can you see him? Click here if you are unable to view the video.