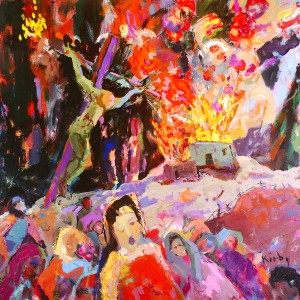 “Believe it or not, the world of the past was much more violent than our world today. Violence has been in decline for thousands of years and today we may be living in the most PEACEFUL era in the existence of our species.” Dr. Steven Pinker, cognitive neuroscientist and Professor of Psychology, Harvard College, and twice nominee for the Pulitzer Prize, scientifically demonstrates through data sets and graphs that this is a fact.

One of the most treasured paintings in the Prado Museum in Madrid, Spain is the artist de Goya’s terribly beautiful painting, “The Third of May.” The canvas shows the cruelty of Napoleon’s armies during the occupation of Spain in 1808. Each figure in the painting presents a different emotion when facing death.

We are haunted daily by appalling images of violence and genocide in the media. Is violence really declining in our world?

Listen to Dr. Pinker prove his point. Click here if unable to view the video.