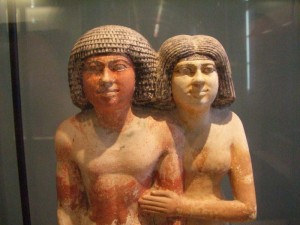 Husband and wife were united for eternity in their tomb in Giza, Egypt.  In 1907, the tomb was excavated and the lovely 20-inch high clay statues were given a permanent place of honor in the Louvre in Paris, France.

An outstanding example of ancient Egyptian burial portraiture, Raherka is painted an earthy red and his wife, Meresankh is rendered in a yellow tone…coloring considered ideal at the time. The wigs and eye lines are painted black.

Look at Raherka and Meresankh’s faces.  They are painted without human flaws and are devoid of expression. We have no clue to their personalities or individuality. The ancient artist didn’t want to give us a clue.  Belief was that the deceased had to be beautiful and without physical imperfections in order to be guaranteed eternal life after death.

The faces may be devoid of emotion, but the body positions are tender and affectionate. Meresankh’s arm is across her husband’s chest…intimate and protective.

Grant Wood’s painting of this Iowan farmer and his wife caused quite a commotion in 1920! The local Iowans were furious at their depiction as “pinched grim-faced puritanical Bible-thumpers.”

Art critics who had favorable opinions about the painting assumed the scene was meant to be a satire of rural small-town life described in literature of that time.

Yet another interpretation saw it as an “old-fashioned mourning portrait. Notice the curtains hanging in the windows of the house, both upstairs and down, are pulled closed in the middle of the day, a mourning custom in Victorian America.  The woman wears a black dress beneath her apron, and glances away as if holding back tears.  One imagines she is grieving for the man beside her…Wood had been only 10 when his father died.  Later he lived above a garage reserved for hearses…so death might have been on his mind.”

With the onset of the Great Depression, the painting came to be seen as a depiction of steadfast American pioneer spirit.

Is there yet another interpretation as we plummet headlong into the technological age?  Scroll down and leave us a comment. 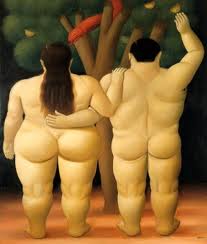 A Botero painting is instantly recognizable!  All his people are hugely disproportionate. The women are voluptuous and Rubenesque and the men resemble baby elephants.

Although we may see a comical, folk-flavored style to his work, underlying that, Botero is quite serious.

He grew up in Colombia, a country that has been riven by social strife, civil war, and drug trafficking.

When Botero’s son, Pedro, was born in 1970, the paintings focused on phases of family life, from birth to courtship to death.

Personal tragedy struck when Pedro died at four years of age in a car accident in which the artist himself was also injured.  He then turned to sculpture, and to religious and political paintings.

In 2007, Botero painted eighty-five works exploring the reports of abuses of prisoners at Abu Ghraib Prison during the Iraq war. They were exhibited in Europe and two locations in the United States, including Washington, DC.