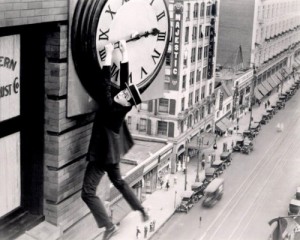 An extraordinary video installation touring the U.S. and Europe is knocking the socks off the art world and critics are calling it a modern masterpiece!

“The Clock,” by artist Christian Marclay, is a 24-hour-long film consisting of over 3,000 old and brand new movie clips spliced together.   In each film clip a clock appears or someone refers to time…the time in the film and the real time according to our watches!

The edited film clips don’t tell a conventional story.  Yet, there is a story.  It is about being aware of time…all the time.

“The Clock” is shown in an art gallery or art space (coming this summer 2012, to the Lincoln Center in New York City).  Comfy couches are arranged in front of a large screen.  The film runs 24 hours continuously.  You can stay as long as you like.

As one critic said, “Looking at a clock for hours a day?  What a drag.  But, oh, after 3 hours I could barely tear myself away.  I didn’t want to leave.  I came back the next day!  The line was around the block.”

What is so fascinating is how the film touches on our anxiety over time.  We know time is passing and to some extent feel its tyranny.

The fictional characters in the film make us very aware of this passing of time.

For instance, at 12:27 A.M., there is a clip of a resplendently dewy Catherine Deneuve, then twenty-one years old, from “Repulsion.”  Four hours later, she’s three decades older, in “My Favorite Season,” an embittered wife intentionally knocking a clock off a fireplace.

At 1:51 A.M. Jack Nicholson is a frantic juvenile delinquent in “The Cry Baby Killer,” at 4:59 P.M. he is the paunchy and bald hero of “About Schmidt,” gazing at his office clock as he dully awaits retirement.

Keep in mind that when we see Nicholson looking at his office clock at 4:59 P.M. in the film clip, it truly is 4:59 P.M. in our real time…by our watches.  Time in “The Clock” corresponds with our local time.  It has only been 3 hours and 8 minutes since he was the juvenile delinquent in the film.  But we know it has really been 55 years.  We become wide awake to Deneuve and Nicholson’s mortality…and hence, our own.

That is what is so captivating about “The Clock.”  The segments of film are married up to the great themes in life…love, death and the meaning of our lives.

Take a few minutes (pun intentional!) to view this great clip of “The Clock.”
Click this link if unable to view the video.