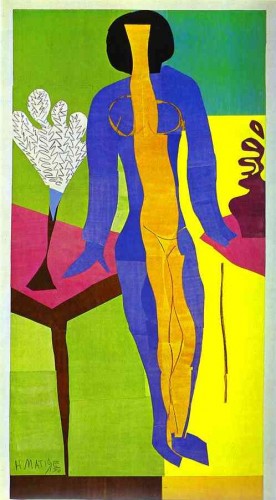 Henri Matisse (1869-1954) has risen to rock star celebrity. He is beloved throughout the world. 500,000 people packed the Tate Museum in London last summer to see his show. The Tate turned the final weekend of the run into a kind of all-night sleepover to accommodate the crowds.

Matisse said this was the best work of his long career.

In the years around 1940, Matisse must have felt he was living a nightmare. In 1939, he and his wife of more than four decades legally parted ways, at her instigation. Two years later, he was found to have abdominal cancer and underwent a grueling operation. During World War II, he fled Paris, only to have the danger of war follow him. 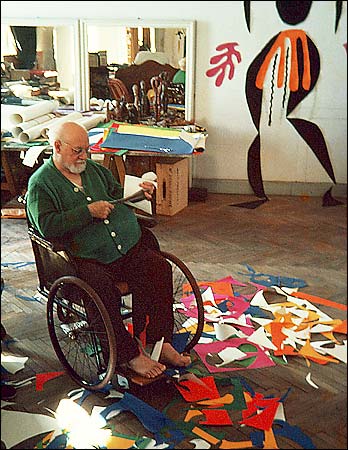 Henri Matisse working in his studio, 1952

At 71, bed- and wheelchair-bound, Matisse couldn’t paint, couldn’t sculpt. But he could use scissors.

Assistants painted large pieces of paper in colors chosen by Matisse. Then the invalid artist cut them into wild and surprising shapes. At his direction, the assistants pinned them on the wall of his hotel suite. 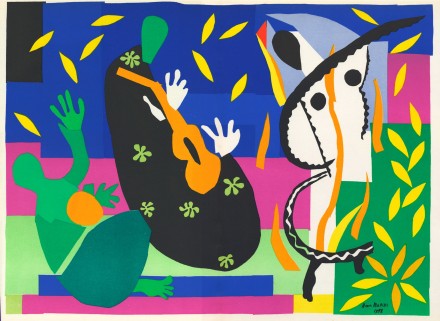 The result: works of brilliant and dimensional complexity, works that were not quite painting, not quite sculpture, and — this was the really radical part — not necessarily permanent.

Nevertheless, some of the most joyous and creative art ever produced!

Take a look at Matisse’s Cut-Outs at the Tate Modern in London. Click here if you are unable to view the video.