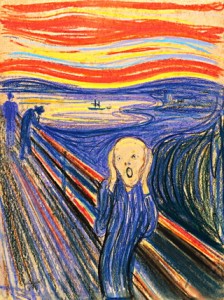 “The Scream”, the Norwegian Evard Munch’s painting, and “Double Elvis”, Andy Warhol’s painting of the superstar are up for sale!

The story goes that the emotionally fragile Munch was walking one evening with two friends at sunset. As he later described it, “the sun set, the air turned to blood, my friends faces turned ghastly yellow and I heard the giant scream of nature.”

Today the image has come to symbolize to some as the fear and anxiety that confronts us in our contemporary world. The painting is expected to sell for over $80 million.

Go ahead and scream if you want to! 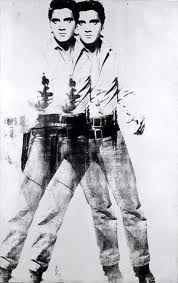 It was 1956 and there was definitely some screamin’ goin’ on!  The screamin’ was done by Elvis Presley’s fans (mainly teenage girls, of which I, your devoted blogger, was one) over his enormously popular and controversial performance of “You Ain’t Nothin’ but a Hound Dog.”  Critics were outraged but Elvis was destined to become the “King of Rock and Roll,” and the best selling solo artist in the history of popular music.

“Double Elvis” is a breath-taking moment in Art History.  Painted by Andy Warhol, superstar artist, the work is a silkscreen..simply a blown up photograph glued on silk and painted with ink.

Elvis, the man and the legend, stares at us down the barrel of a gun; the lone cowboy confronting the great American frontier.  “Double Elvis” is expected to sell for $50 million.

Now, let’s all scream! Watch “The King of Rock ‘n’ Roll!
Click here if unable to view the video “