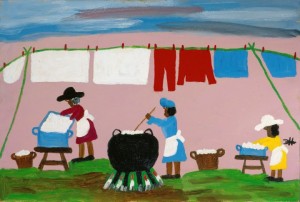 Even though she was born in 1886, twenty years after the Civil War, segregation and oppression of the blacks was still rampant. These paintings are gentle images of this oppression.

What a story! Clementine spent much of her life working on a plantation in Louisiana and only attended school for ten days, never learning to read or write. While she was working as a house servant, an artist visiting the plantation left some discarded brushes and tubes of paint. She became intrigued and used the brushes to “mark a picture, or a window shade.” Clementine Hunter’s career as an artist began.

Often referred to as the black Grandma Moses, Northwestern State University of Louisiana granted her an honorary Doctor of Fine Arts degree when she was 100 years old. 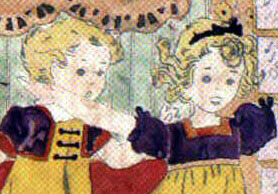 Tragedy found Henry Darger early and often. When he was 4 yrs old, his mother died. Unable to care for him, Darger’s father placed him in an orphanage. Labeled a troublemaker, the young Darger was moved from institution to institution. At 16, Darger ran away and for the next 64 years he lived alone in a rented room and worked as a janitor in Chicago.

Darger died at 81. His landlords cleaned out his room and made a startling discovery: alone in his room, Darger had created hundreds of beautiful, large paintings illustrating an epic fairytale (15,000 pages) he had written over 60 years. 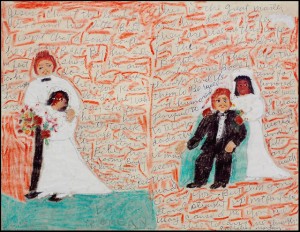 Jesus Christ The Lamb of God and His Little Bride, 1960
Sister Gertrude Morgan
Crayon and ballpoint pen on paper.

Sister Gertrude Morgan (1900–1980) was a poet, a preacher, an artist, and a singer who loved Jesus. She called Jesus her husband, her doctor, and her airplane (yes, airplane), and claimed to have met with him in visions throughout her mid and later life.

Born on a farm in Alabama, in 1900, Sister Gertrude left school after third grade so that she could help her family with the farm work.

Preaching the gospel tirelessly in the streets of New Orleans, Sister Gertrude founded an orphanage and ministered to the sick and inmates of Orleans Parish Prison for years.

Later in life, she said she had had a revelation that she was to be the “little bride of Christ.” This calling she took with great seriousness, dressing solely in white garments for the rest of her life.

After this revelation, Sister Gertrude’s paintings were little figures of herself in a white bridal gown standing beside a pudgy little Jesus wearing a tuxedo. Other images pictured her and Jesus in an airplane flying around heaven. She was adamant that her paintings were divinely inspired and indeed, perhaps they were.

Fantastical video of Henry Darger’s images and fairytale.
Click here if unable to view the video.